Move along, now, nothing to see here. Gonna nip this in the bud!

There are a few issues going on in our country now. A whole lot, actually, but three big ones, specifically.  I’m sure you’ve heard of them.

These issues are not uncomplicated. Associated with these issues are reports of facts suppressed over the Benghazi incident and a continuing unraveling of the IRS scandal.  After it was initially reported that it only occurred in the Cincinnati office, it’s been tied back to Washington.

James “Clearly Erroneous” Clapper. That is not his sexting name.

This post is not about these issues, specifically, but about the administration’s current response to them.

However, um, in the words of Ron Burgundy, these things are “kind of a big deal.” Yet, apparently our current administration doesn’t think so.

Let’s be clear. These issues are this big. Let’s get to the really important stuff, which is….something other than this.

In a press conference last week, and in a TV interview with MSNBC’s Joe Scarborough, Jay Carney said these issues were “Phony scandals” and “Fake scandals.”  When called out on those comments by Scarborough, Carney’s response was essentially, “The President has appointed someone to take care of it and we should move on.”

Apparently, this is going to be the administration’s response to how they are going to handle these issues that are plaguing their administration, and our country.

With everything that’s going on, Obama has decided to go on a campaign tour about the economy.   As part of his address, he said “”With an endless parade of distractions, political posturing and phony scandals, Washington has taken its eye off the ball.”  It’s honestly hard to believe that this is what he said.

The self-professed most transparent administration in history has decided “there’s nothing to see here.”

Click the link or chose other options below and listen to this podcast, unless of course you hate Murica.

Go to iTunes and search for unfiltered and unfettered and you will see our new UF logo. Click, enjoy, write review.

If you don’t use iTunes, you can find us on Podhoster: http://unfilteredunfettered.podhoster.com/

On to the tease.

He’s also the Secretary of State John Kerry.  Was not at the White House during the military coup in Egypt.  He was on his yacht.  No one cared… until he said he wasn’t on his yacht.  Pictures surface showing he was in fact on his yacht. LIAR!

It’s cool, he raised his left hand. We’re all good.

He’s also the Director of the National Intelligence Agency, James Clapper. Went before congress and swore an oath that the NIA, CIA and FBI were not collecting information on ordinary American citizens.  This was prior to Edward Snowden’s big revelation. Clapper has since apologized.  Yeah ok thanks dude.  As long as you’re sorry. LIAR!

Whoops.  No that’s me.  Here are a few shots from inside 1B The Monolith Studio where Unfiltered & Unfettered is taped.  Tony is the good lookin mug with the facial hair.

Come on, try and collect our data. 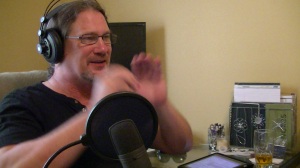 Two jag offs with microphones and internet access. What could go wrong?

So there is a look behind the curtain, seeing the sausage being made as it were.

All this plus an in studio guest and a new member joins the UF & UF team. Oh and we breakdown the summer of redemption in NY city politics.

I know you may be stunned by our dashing looks, but don’t forget to click the link, unless, you know, you hate liberty.

Go to iTunes and search for unfiltered and unfettered and you will see our new UF logo. Click, enjoy, write review.  No iTunes? You can find us here: http://unfilteredunfettered.podhoster.com/