Look man, I can’t stand the guy. Those shirts and stickers going around about Missing W will quickly be replaced by shirts saying Missing O yet? if Trump were to become President. Yeah they will. Trust me on this.

However, as much as I fear for the republic should Trump become the president, I fear more for it if protesters can block free speech. In other words, “Hey you dopes, get off the damn road. This is America. People are allowed to speak freely no matter your disagreement with them!” 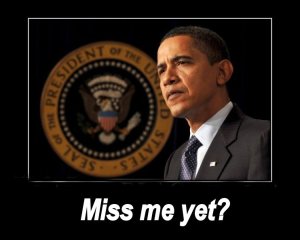 Thank a Trump protester for this.

Believe it or not, Trump becoming president is the system working. Protesters being allowed to block a highway and keep Trump supporters from getting to the rally, and keeping other people from getting to places like, oh I don’t know, the doctor, food shopping, or home to their bed, is not the system. That’s the other guy’s system. That’s the system that leads to less freedom, less America.

Sound familiar. It should. It’s the very thing Trump protesters accuse him of trying to do. They irony! It stings!

Want more irony. Buckle up. Blocking his supporters from Trump rallies only creates more Trump supporters. Sound familiar? It should. The radical left in this country has been singing this song about Guantanamo Bay prison for almost 8 years. Their theory, holding terrorists without charging them, will only create more terrorists.

Now hold on to your toupes Trumpites. I am in no way comparing you all to terrorists. I’m merely pointing out the hypocrisy of radical people in this country. For the last 7 or so years the Tea Party filled that slot. Now the left have stepped up in a big way. That giant lilly white orb is their collective ass (assi?) hanging out.

Ok only two more ironies to kick out. Hang tough. 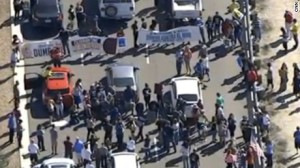 Chris Christie was practically castrated and his presidential run blunted because he blocked a bridge in Jersey to effect payback on a non-supportive mayor. An old man died in an ambulance because said ambulance could not get to the hospital, instead being stuck in a traffic jam. Sound familiar? It should.

Yesterday several people were tweeting or facebooking that they were stuck in traffic in the burning hot Arizona dessert. One unfortunate lady was coming home from the hospital after a surgical procedure just wanting to get to her bed. How are these folks any better than Chris Christie, the same man they were howling about when the bridge story made the papers?

If Trump protesters get Trump out of the race, they succeed. That is if succeeding means to fail miserably. All polls around the country show Hillary whooping Trumps ass from Concord to Carlsbad. The one guy she’s not beating in the polls is Ted Cruz. She loses to him by 5 or 6 points. Almost in the margin I grant you, but still she would be trailing Cruz.  So if you hippies somehow get Trump to quit, your girl loses, most likely. If he stays in, your girl sweeps to victory.

Let’s not even talk about the scores of undecideds stuck on the road in Arizona you just pushed to Trump’s side of the ticket. Pure genius.

So one question Trump protesters. Whose side are you are on anyway? While your head explodes contemplating that, please for the love of God and country and freedom…

GET OFF THE DAMN ROAD!

One comment on “Hey Trump Protesters – Get. Off. The. Damn. Road!”