Big show tonight. Fresh off our 1 week hiatus, we have some serious stuff lined up. We’re talking racism – Bundy and Sterling and Gumble, rebellion – the good kind (Star Wars) and the bad kind (Republican civil war), and retreads – SOS John Kerry (who else).

Let me tell you about the negro… 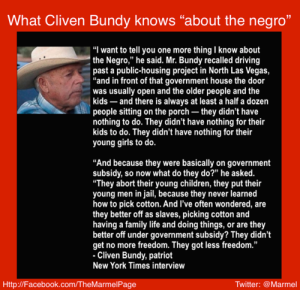 Bundy espouses his beliefs on why the negro is lazy, all while taking welfare from the government, and stealing for years as he lets cattle graze on federal property. Sterling won’t draft white guys because only the blacks can play ball and doesn’t want his girlfriend to bring black guys to the game or be photographed with them because his boys make fun of him. In the words of Vince Lombardi “What the hell is going on around here!”

Speaker of the House, John Boehner, is called to a private meeting on the Hill after he returns from a weekend speaking engagement in Ohio. At that Ohio speaking event, John of Orange let his own party have it with a mocking diatribe implying Republicans don’t want to do anything that’s hard, like immigration reform. Sit with your back to the wall John, and if there’s plastic on the carpet – run.

Kerry says lifelong ally Israel is steps from being an apartheid state similar to South Africa years ago. He received the correct amount of scorn from the Right and crickets from the Left. In other words no support no where. Then he does the honorable thing, like when he threw his Vietnam medals over the Whitehouse fence, and says he never say nothin bout no apartheid.  1.9 million cells phones begin to play the audio clip from the meeting where Kerry said that very thing. Hill-dogg’s not lookin so bad now is she?

All this and some ominous Signs of the Apocolypse. You’d think that would be redundant, but strangely it’s not.

Click the link and be amazed, or terrified, whichever.