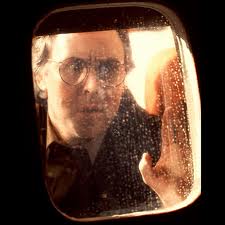 SERIOUSLY, I saw a dude in the wheel-well!!

The title refers to an old Twilight Zone episode about a guy on the wing of an airliner in flight. The original starred William Shatner, but I prefer the remake with John Lithgow. Fran had an amusing experience with this particular episode (the Shatner one), I linked it below.

Airlines. If you fly at all, you’ve probably got your own stories. I used to fly a lot, not as much now. Here’s a couple of my stories.

I’m in line, Baltimore, I think, and they have one of those body-scanners that circle around while you hold your hands over your head. One of the ones people used to complain about because they can see through your clothes. They also had a regular scanner. So, they’re sending one that way, one this way. I count back, and see that I’m going to get the body scanner. Except….there’s this young lady in front of me, 5’2”, 105 or so, very shapely, attractive young lady. The count’s going 1, 2, 1, 2, 1, 2, 1, 2. Then it gets to the young lady in front of me. 1, 2, 1, 2, 1, 1. The TSA agent is a big guy, think Newman from Seinfeld in a TSA uniform. When he points the young lady to the body scanner, I busted out laughing, just couldn’t help it. I said “C’mon dude, really?!?!” laughing away. He deadpans me. Not a flicker. I say to him, “Hey, could I at least get a copy of the picture?” He deadpans me again, pointing at the regular scanner.

I was flying to Boston on business. I was taking my tablet in my carry-on, but at the last minute before I left the house, I decided to take my laptop, just easier to type if you need to. I opened my suitcase and slid it in the middle between a bunch of clothes in the bag I was going to check in. When I arrived in Boston and got to my hotel, I discovered someone had stolen my laptop. Of course I was furious. The laptop was bad enough. It was a few years old and almost ready for replacement, even though it had taken on the electronic quality of a worn-out pair of jeans you don’t want to get rid of. Wasn’t ready to part with it yet.

Worse to me, though, were the other implications. I’m going through strip searches, throwing out nail clippers, and the airlines are unable to exert positive control over my luggage. In short, what really worried me was, if someone can just take something out, someone could just put something in. For all of the security B.S., there was absolutely no chain of accountability when it came to my bag. Even worse, for all the commotion I raised and letters I wrote, I couldn’t even get anyone to act like they cared.

I like Arnold Schwarzenegger movies. Sue me, I like dude stuff. Most of the time I can suspend reality for the sake of the movie, as long as they’re consistent within themselves. One movie, though, pushed me over the edge of believability (Ok, not just one, wise guy, but this is relative to the post). It was called “Commando,” and the plot is unimportant. In it, Arnold is pursuing a bad guy, and to find out where he’s going, he climbs in the wheel well of a jumbo jet to go where the bad guy is going. Ree-dic-u-lous. 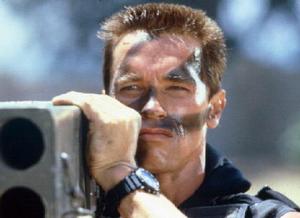 I’m a bad dude who can fly in wheel-wells. I mean, not really, just in the movies.

Because, you know, even an ex-special forces super-tough-guy in a movie can’t climb in a wheel well and hitch a ride.

Except a teenager can.

Of course I’m referring to the recent story of the teenager in the wheel well that hitches a ride to Hawaii. Excuse me for being callous, but forget about the kid for a minute. We’re throwing out things because they’re an ounce over, getting rid of nail clippers, wearing slip-ons so you can get through security quick, going through ridiculous security procedures, all to make flying “safer.” And we put up with it because we think the people in charge know what they’re doing.

And a kid sneaks in the wheel well.

I have the same fear as I did when my computer was stolen. If someone can take something out…..

If a kid can sneak in a wheel well undetected…..

I was trying to think of an appropriate anecdote, but I think this is the anecdote for other stories. Like, well, you can make people fly in shorts and a t-shirt, but if you can’t stop a kid from getting in the wheel well…..

If you fly, I’m sure you’ve got your own security nightmare story. For some of us, flying is a necessary event in today’s world. For the most part, I think the airline industry sucks.  Sure, some of the working people try to make it better, and I’ve met a few good attendants. For the most part, we pay a lot of money to get cattle-car treatment, and that’s after we get sprayed down by the TSA.

But while they’re making me throw out my toothpaste tube because it’s an ounce over, maybe they should think about having someone watch the outside before it takes off.

Don’t miss the big stuff while you’re fiddling with minutia. Just a little while ago, none of us would have ever thought an airliner could just disappear.

From Franks Place, “Captain Kirk Made me Turn On The Lights.”