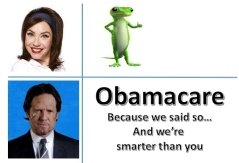 All we needs a good ad campaign

Obama got the young vote in the election. Most statistics say Obama received 60% of the 18-29 demographic. These are the same people Obama needs to make his ACA act work. Except they are not supporting it.

Obama created a piece of legislation that, as part of it’s framework for success, depends on young people to pay for it,  in the hopes that they won’t use it, to support the people that do use it.

It seems Obamacare is failing, in regards to youth support, on several counts.

Obamacare was designed dependent on the fact that young people will buy plans, when in fact, young people care very little about buying insurance, and in addition, they do not have any confidence in Obamacare.  In a fall, 2013 Harvard University Institute of Politics poll:

A new national poll of America’s 18- to 29- year-olds by Harvard’s Institute of Politics (IOP), located at the John F. Kennedy School of Government, finds a solid majority of Millennials disapprove of the comprehensive health reform package that the president signed into law in 2010, regardless of whether the law is referred to as the “Affordable Care Act” (56%: disapprove) or as “Obamacare” (57%: disapprove). Less than three-in-ten uninsured Millennials say they will definitely or probably enroll in insurance through an exchange if and when they are eligible. http://www.iop.harvard.edu/fall-2013-survey

Less than three-in-ten? Not good if you’re depending on them.

Then, of course, there’s the obvious. You created a program dependent on people signing up who, just naturally, are at the lower end of the economic scale. They’re just starting out, and, by the way, in a not particularly strong economy.

The problem is Obamacare occurs in a context of young people. They’ve graduated from college, those who have, a great many of them into a job market that is — unsatisfying. And they are graduating with federal student debt that they got because the Obama administration, with a flood of subsidies, caused the colleges to raise tuitions to capture the subsidies. And now they are coming out with this debt and they are greeted by the Obama administration — ‘Congratulations, you’ve got your degree. Buy some insurance that you don’t want at a price you can’t afford.’ It’s just not promising.

Again, the legislation is dependent on the 18-29 crowd signing up. However, they made it possible for a significant amount that population to not have to sign up.  The following is off of the healthcare.gov website.

If a plan covers children, they can be added or kept on the health insurance policy until they turn 26 years old.

Children can join or remain on a plan even if they are:

Did I miss something here? You need this population to sign up, yet most of them are probably eligible under someone else’s plan.

Then, of course, there’s one more significant problem. You made it hard for young people to sign up for something they don’t want and can’t afford.  A complete trifecta. With a group of 18-29 year olds, you prevented them from signing up by the only method many of them might have. Online. You bungled the website.

Of course, one of the legislations architects, Ezekiel Emanuel, thinks the whole thing could be solved by just a little PR.

Ezekiel Emanuel, a former health adviser to the president (and the brother of former White House Chief of Staff Rahm Emanuel), argued the administration has been too caught up with fixing HealthCare.gov to give the law the proper promotional push.

“No one has launched a big PR campaign to get these people signed up because of the problems with the federal website,” he told “Fox News Sunday.” “We are about to launch a big PR campaign, and that, I think, is going to persuade a lot of people to sign up.”

He noted the administration still has “four more months to go until the end of March,” when penalties kick in for those who haven’t gotten coverage

He said he thinks young people will be incentivized to sign up, and noted that the looming penalty will convince more to sign up by March 31.

Sure, it just needs a little PR. You know, along with some penalties for those rebellious young barbarians if they won’t sign up. “Incentivize them with a penalty.” What an ignorant concept. Another look behind the curtain as to why this legislation is bad.

I sure like that Flo from those insurance commercials, maybe they can get her. Of course, I don’t like her enough to convince me to get insurance. And neither will these young people.

5 comments on “Obamacare and the young barbarians”