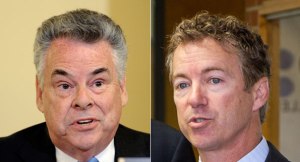 Well we were wrong. Tony and I had discussed on our podcast that the race for the White House would heat up in the late summer of 2014. That has been the norm. A straw poll event in Iowa in late August 2 years prior to the actual election is what normally kicks off the presidential race.

So for example, the election for the next President is in November of 2016. The straw poll/state fair type event in August of 2014 would usually start the festivities, meaning sniping, snarking, baiting, and berating by all the candidates running for their party’s nomination. So that’s a good 2 years and 3 months of campaigning in some form. However it appears the Rand Paul campaign has decided to get a jump start. Read what one of his operatives in New Hampshire, Andrew Demers, had to say about Congressmen Perter King (R) NY. The quote appeared in the New Hampshire Union Leader in an opinion column written by Demers himself.

“In New Hampshire, where two of the top three 2012 Republican presidential primary candidates were non-interventionists (and carried 40 percent of the vote total of the five major candidates), Rep. King will not have much luck with a message that even he admits most Republicans oppose.” Andrew Demers New Hampshire Union Leader 26 December 2013

King has been publicly contemplating a run at the White House in 2016 as well. I guess Paul is looking to stomp all the early challengers as quick as possible. Demers also used phrases like “King’s faction on the Republican party” and called King an interventionist because of King’s stance on Syria. Read the entire piece here: http://www.unionleader.com/article/20131227/OPINION02/131229497

This is a great sign for political geeks and junkies. I count myself among them. The first three buttons on my TV remote favorites list are C-Span, C-Span2 and C-Span3. And with good reason. As President Obama is term limited we should get twice the fun since both parties will be having meaningful primary elections.

Tell me you’re not excited about this!

I mean it’s not unprecedented by any stretch. This won’t cause a lot of ripples for most people. But a shot like this, coming this early in the proceedings, indicates it’s gonna be a good brawl for the next two years. And this is just the Republicans. The Democrats haven’t even started trying to bring Hill-Dogg down yet.

I get that this may be a complete non-story for most of you. But I’m baking cookies and putting out a glass of milk, cause for me this is Christmas Eve all over again.