So the fight against Obamacare or the Affordable Care Act, has shifted into a new gear. 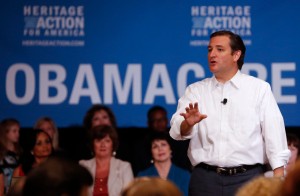 Senator Ted Cruz from Texas is the new face of Defund Obamacare and he has put a charge into the movement.  To most it appears he may be the best chance to defund Obamacare once and for all. He’s been on a summer long nationwide tour to rally the American people to his argument.  And he’s been winning.

Now it looks as if his efforts have arrived at the precipice. The House of Representative have again voted to defund the ACA.  42 votes so far, but number 42 is different.  This time the ACA was tied to the budget.  The bill was worded in such a way that allowed Republicans to vote to defund the ACA while approving the continuing resolution to keep the government running.

This means R’s can defund the ACA and not take the blame for shutting down the government.  Or so they think.

The bill is now in the Senate and Cruz is on the floor as I type, (3:13pm est) speaking to an empty senate chamber.  The cloture vote is Wednesday; meaning the vote to end discussion on the bill.  Cruz is attempting a filibuster to delay the cloture vote in the Democratically controlled chamber. Procedure is not on his side.  A lot of Republicans are not on his side.  Hence the empty chamber right now as Cruz makes his last ditch effort to sway his party to unite over the defunding of the ACA and block the vote at the same time.

Cruz claims he will speak until he’s no longer able to stand.   Mike Lee, Republican Senator for Utah has interrupted for a very long question.  In fact Lee’s question is going on 10 minutes now. Lee is a co-sponsor of the summer long defund tour.  This filibuster appears to be a tag team effort.  God I love C-Span.

Cruz believes his cause is righteous and his methods are just.

Here is why he is wrong.

If Ted Cruz succeeds in blocking the vote, or swaying enough Ds to his cause to win the vote outright, he’ll win his battle.  And then he’ll promptly lose the war.

A lot of Republicans believe likewise and are worried about Cruz.  Senator Mitch McConnell of Kentucky, the Senate Minority Leader is urging Cruz to step back and has said tying the ACA to the continuing budget resolution to the ACA was a bad idea. More telling, Senator John Cornyn of Texas, has said the same as Mitch McConnell.

So what?  Big deal if R’s take the hit for the shut down.  Well the only way to truly get rid of Obamacare is to win the White-house, change the numbers in the Senate, win elections.  It’s the only way.

The make up of the current House and Senate leave no procedural options available to get rid of the bill.  And believe me the bill needs to be gotten rid of.  It’s a giant bucket of bad. So blaming R’s for shutting government down will impede Republican efforts to win elections.  At least that’s what McConnell and other establishment Repubs say.  I’ve heard some hard core conservative pundits say the same.

One gentleman on Fox said the ACA is already being defeated just by it’s implementation. He’s right.  The bill is so badly written and has been so badly executed, so many deadlines have been missed, so many exemptions have been granted, so many companies have eliminated 40hr employees to avoid penalties under Obamacare.  By 2016 any Republican candidate for President need only hammer home how his opponent supported Obamacare and the election might very well be theirs. So shutting down the government might derail gains made against Obamacare.

What are Democrats saying?  Nothing.  They are on the sideline as Tea Party members of the Senate battle the establishment of the Republican Party in the Senate.  Why should they speak? Republicans are once again loading the gun in a effort to blow off their own feet as we approach mid-term elections.

Mike Lee, in his now 18 minute question just said, “A law has become less, and less popular as time has gone on.. and less and less something the American people support.” The look on his face and the halt in his voice clearly show he just realized he made McConnell and Cornyn’s case for NOT filibustering, for not tying the budget resolution to the defund Obamacare bill.

In other words Lee just laid out why Cruz should just shut up, let the bill do it’s damage, and let the Rs go out and win some elections beating Ds over the head with it.  But now it seems Republicans will have to get over their civl war and answer for why they shut the government down.  That was not Lee’s intention.

The Republicans have been here before.  In 1996 President Clinton vetoed a budget bill that triggered a government shut down.

Republicans, led by the Speaker of the House Newt Gingrich, tried to lay the blame rightly on the White House doorstep.