Karma rarely works this fast.  Or this comically.  Thank you Jesus for creating Karma and The Donald.

First reported here on our UF/UF podcast: Episode 15, Senator Cruz, or Ted to his friends and electorate, has had to prove his status as a natural born citizen.

Here’s the problem.  Ted Cruz was born in Canada.  He was born in the city of Calgary, province of Alberta, to be exact.  His father is Canadian.  Ted Cruz by law, is a Canadian citizen.

It’s hard to type through the tears of laughter.

It’s funny cause… well you know, cause… the whole birther thing with Obama and… you know Trump sent a team to Hawaii and… look people this is funny!  No, not doing anything for you?

Tap Tap Tap  Is this thing on?

Made funnier by the fact Cruz lent his voice to the Obama birther issue, Cruz has been peppered with questions over the past month, prompting the release of his birth certificate on Sunday.

Quickly explained by Cruz, his mother is an American, born right here in the old US of A. By American law that makes Cruz a natural American.  Now he is Canadian by birth as well, and he still maintains dual citizenship; a fact someone ought to tell his staff.  They went on the offensive with the now permanently quoted line:

“Senator Cruz became a U.S. citizen at birth, and he never had to go through a naturalization process after birth to become a U.S. citizen,” Cruz spokeswoman Catherine Frazier told the Morning News. “To our knowledge, he never had Canadian citizenship, so there is nothing to renounce.”

Hey Cath, it’s bad enough you don’t know the history of your own boss, a critical piece I might add, but you should at least know the law and how it treats dual citizenship.

If any of this sounds familiar, just replace Cruz with Obama, and Canada with Hawaii, it’ll come to you.

Of course Cruz’s explanation of his eligibility and natural citizen status was accepted without question.  And my gut tells me this will just be barely an after thought or a mild chuckle if Cruz announces his run for the White House.

And why wouldn’t it be.  He ain’t black.

Seriously, the same exact conditions have existed for the last 6 years and still people are calling for Obama’s impeachment as not being eligible on basis of birth.  There is one difference, Obama was born in the US, Cruz, and John McCain for that matter, were not born here.  McCain was born in Canal Zone in the Republic of Panama, 1936.

In case you were wondering, McCain ain’t black either.

I got some sobering news for you folks.  Martin Van Buren, the 8th President, was the first President born in the United States of America.  The first 7 were still British subjects and never had their English citizenship formerly renounced.

So the big question, is Rafael Cruz, Senator from Texas a natural born citizen of the United States of America and there-by eligible to be President. 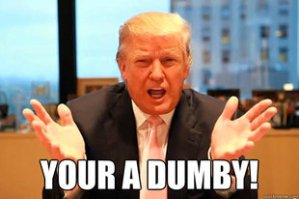 The unintentional comedy will be epic.

Of course he is you dolts!

His mother was an American, that makes him an American, by birth, forever.  The law was passed by The Congress in 1790, a scant 14 years after we became a country.   Yet we still, 223 years after the law was passed, have US Senators and the President of the United States releasing their birth certificates trying to prove to the public they are Americans.

Quick civics lesson gang.  The Vice President decides the eligibility of the nominees for President.  Meaning, after the Republican and Democratic conventions, when the parties name their candidate, the sitting Vice President signs off on their eligibility having reviewed the information gathered by the FBI and other agencies.

In other words the information had already been turned up.  Trump can send all the crack investigative teams he wants to Maui, they’ll find nothing new.  Well, except for the Gand Waliea resort changed chef’s in 2011.  The Mahi Mahi has never been the same.

So who’s the numbskull that approved the nomination of one Barak Hussein Obama? Born in Hawaii, to an American mother, and we still don’t believe him to be an American?

Well, that would be Vice President Dick Cheney.

Thanks a lot, Dick!