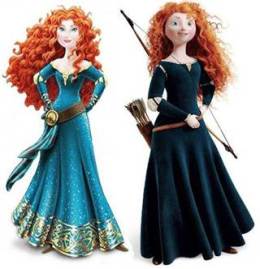 I’m not a big fan of Disney. Ask my buddies. I think Disney is like dish-soap for American culture. Anyway, they have a new controversy, and it’s over the representation of a character from an animated movie called “Brave.” I’ve not seen it, don’t know anything about it. However, as reported in the news, the controversy is over a new doll, and the way they’ve made her over to be thinner and prettier than the original character. The concern is the role model she provides for young ladies.

Brenda Chapman, the director of the original film, says “”When little girls say they like it because it’s more sparkly, that’s all fine and good but, subconsciously, they are soaking in the sexy ‘come hither’ look and the skinny aspect of the new version. It’s horrible!”

“Merida was created to break that mold — to give young girls a better, stronger role model, a more attainable role model, something of substance, not just a pretty face that waits around for romance,” Chapman explained.

In “Amusing Ourselves to Death” Neil Postman makes an argument about kids learning by watching tv shows like Electric Company and Sesame Street. You know, they watch Sesame Street and the Electric Company, learning their abc’s and basic counting, etc.  His argument is not about what they learn intentionally. It’s also about what they learn unintentionally. Because they’re learning everything, not just what we want them to.  They’re learning that anything worth knowing comes in 10-second sound bites, with bright colors and loud noises to hold their attention. They’re learning that when they want to stop paying attention, they can, or they can get up whenever they want, or talk whenever they want. The point is that they learn all the aspects of a situation, not just what is intended. So, after 2-3 years of sitting in front of the tv, we put them in schools, expect them to sit still, keep their hands to theirselves and their mouths closed. When they don’t, we call them hyper-active (and other things as well) and drug them.

Ok, so let’s talk about Roe-vs-Wade, 1973. A couple of generations have been raised with this now.  Let’s look at the lesson that has been learned, unintentionally, by individuals growing up under RoevWade.  One of the first things they’ve learned is “choice.” You know that saying, “right to choose.” The subject of aborting a fetus has been linguistically tied to getting a boob job. “It’s my body, I can do what I want.”  Of course, the aspect of the “body” part being a baby in this example is always overlooked. It’s like getting plastic surgery.

So, it’s happened again. It happens more than you think. I’ve referenced a few articles below. Another teen girl has given birth and thrown her baby into a dumpster.

These young ladies that throw their babies in the trash have been portrayed as some twisted monsters.  Link to the articles and read the comments underneath. These young women are vilified.  Perhaps they are monsters, but the real unfortunate aspect of this is simply that what they’re doing is a manifestation of what they’ve learned. Our society has taught them that the baby is a choice. In most of these cases, these young women are probably saving themselves some money, probably the embarrassment of an abortion. But they’re simply manifesting what they’ve learned. The baby is a choice, and they’ve chosen not to have it.  They’re dealing with it in their own manner. Another lesson society taught them is ok.

I don’t argue with anyone about abortion. I don’t argue whether it should be legal or illegal. But my personal value is this; abortion as birth-control is wrong. It’s barbaric. It de-values human life.

Is throwing your baby in a dumpster horrific? Yes. Is abortion horrific? I’ll leave you to answer for yourself, for me, I’m not sure there’s a big difference. It’s been in the news a lot lately.

Funny how we’ll make a big deal about a doll’s impact as a role model, but disregard the impact of a signal society has sent since 1973.

7 comments on ““Brave” and babies in dumpsters”