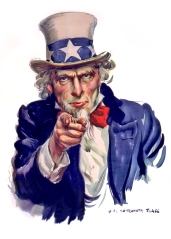 I want you….to buy condoms from me

Remember that show, with Chris Hanson, “To Catch a Predator”?  There would always be some creepy guy who just drove half the night to meet some underage girl. They would come in the house, lured by some online chat talk, and Chris Hanson would walk out and engage the “perp” (or “perv”).  It seemed like almost always, they would bring condoms. Then Chris Hanson would say something like “If you just came to talk, why did you bring condoms?” (They would always say they “Were just going to talk.”)

After reading the story below, I had this vision that Chris Hanson would walk out….and it would be old Uncle Sam with the condoms (Hey, I’m not here to have sex, just wanted to bring some condoms by).

The condom access project in California has been expanded in two counties to include ages 12 and up.

As part of the project, anyone between 12 and 19 years old in those counties can confidentially request a pack of 10 condoms online, up to once a month. It’s similar to Planned Parenthood programs that offer free condoms to teens who come to the organization’s health centers.

Nice that it includes some lubricant, so junior doesn’t break the condom while he’s in the playroom getting busy with Sally.

The FDA has approved the Plan B morning after pill for 15-year olds. Without a prescription or parental consent, a 15-year old can get one of these pills.  A little research reveals the age of consent is pretty consistent at 16.

The decision has been kicked around between the FDA and the courts. You can read the details in the reference below.  Concerning  the latest decision,  the “Center for Reproductive Rights” president said the following:

Nancy Northup, the center’s president and CEO, said in a statement about that order: “This landmark court decision has struck a huge blow to the deep-seated discrimination that has for too long denied women access to a full range of safe and effective birth control methods.

And yes, I understand the whole “They’re doing it anyway” argument.  But it’s lame. Just giving up on raising kids and teaching responsibility,  oh, what the hell. Also, it just doesn’t pass the logic test, which means applying it to other situations. Like “Well, they’re doing meth anyways..” You know, just fill in the blank with any illegal activity.

For a second, however, let’s give validity to the “they’re doing it anyway” argument.  It still doesn’t make it the governments business. Yes, I know many will disagree, saying the government needs to step in on certain social issues.  Ok, but aren’t we even a little bit concerned about the government making things available to minors whose purpose is engaging in activity that is illegal? Is the government approving of minors having sex now?

I was in a University of Tennessee classroom, post-graduate work. The topic was sexuality.  I asked a question “If we’re moving the line on sexuality, who decides where the new line is. How do we now decide what’s ok and what’s not? Is everything ok?” Everyone, including the professor, looked at me like I had pissed in their Starbucks. How dare I ask such a question!  You know, a philosophical question about our society in a post-graduate institute of education. How dare I question their liberal sensibilities.

However, I think I have a view of the next line we’re going to move.

Because the next line is…..Age.