Nothing good ever  happens after mid-night.  I think that’s how the saying goes.  Don’t know who said it, don’t really care.  That person might be wrong in this case.

This is not necessarily a response to Hupp’s Cliff Diving piece as much as it is a follow on. Hupp used a fancy picture of a cliff diver, ironically in mid dive.  He had left the cliff but not yet hit the water.  Knowing Hupp, this was most likely on purpose.  Cause guess what, the diver still hasn’t hit the water.  In fact he really hasn’t moved much from his current position.  He has no clue what awaits his finely quaffed gourd once he breaks the surface of the beautiful blue water.  Here he is again. 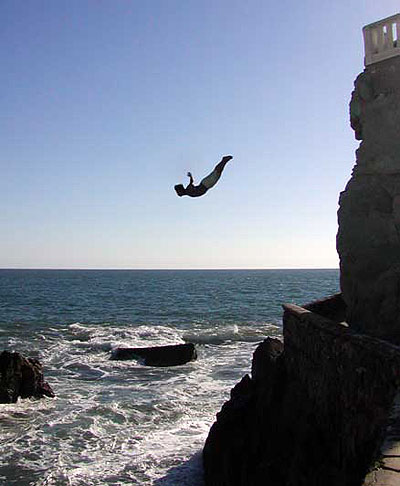 What’s under the water? “I dunno let’s just jump!”

The choice to jump is/was tempting.  Much like a baptist minister when he talks about the beauty of sin.  If sin was ugly and we saw how it really looks, we wouldn’t be tempted by it.  It has to look inviting or we wouldn’t do it.  Well that water must look pretty damn inviting for us to leave the safety of the cliff.

And left we have.  At 2:00am on December 31st 2012, yeah 12 short hours ago, the Senate passed, by an 89 to 9 vote, the fiscal cliff deal designed to avoid the extreme tax and spending cut measures that would hurtle our economy back to the stone age.  At least that’s what the pundits are saying.  Did the stone age have an economy?  The deal to avoid the cliff was conjured by that wizard Mitch McConnell (R) KY and Crazy Uncle Joe (VP) planet Krypton.  But in essence we still jumped.

Want to see what’s under thew water, really?  Click the link.  Go ahead.  I dare you.   I’ll even break the eternal school yard bro code etiquette and go to the dreaded triple dog dare.

Read the deal here.  Look out below!

We’re not done yet.

While the Senate passed it just about unanimously, we’ll talk about the 9 dissenters in a minute, the House will be a tougher sell.  Congressmen and Women answer directly to people, unlike Senators.  They have a distinct district where people have direct access. That equals consequences at the polls on election day.  Don’t be fooled, even republican politicians, who run their cake hole about smaller government, still want to be part of that government.

So the House convenes at noon today.  Like the Senate vote the House vote will be on C-Span.  But the vote might not be until late in the evening, possibly between the 7 and 9 o’clock hours.  We’ll see hoe the House folks do with a full day of work.  I was surprised at how engaged and energetic those old white dudes in the Senate were at 2:30 in the morning.  There were a lot of good speeches after the bill passed.  McConnell led the way with a sobering but logical speech around 3am.

The issue in the House is this, the bill could get scuttled by either side.  Boehner is up for reelection to his speakership in a few days.  That has to weigh in on how hill frame this bill to his party before the vote.  Some ultra liberals my undercut the President because it only taxes people who make over 400,000 and 450000 for couples.  The republican base may burn the House down because ultimately it is still a tax hike.

When No votes mean Yes – the dissenters

So 9 senators voted no on the bill.  Ladies and gentleman, your 2016 Republican Presidential Primary candidates.  Rand Paul, (R) KY and Marco Rubio (R) FL didn’t just vote no, they voted Hell No.  Of course their courage came well after the bill passed, so their votes had no bearing.  Very brave guys.  However had they voted Yes it most likely will be used against them in the 2016 Presidential primaries, or so they thought.  Paul and Rubio are saying all the right things to keep the Tea Party on their side.  McConnell has pretty much just retired.  He will be primaried by his own party for his Kentucky senate seat in 2014.

Orrin Hatch (R) UT who successfully courted the Tea Party in 2010 to keep his Senate seat may have just forfeited it by voting for the bill.  He barely won his primary last time. He’ll not be the Senator for Utah in 2014.

Richard Shelby (D) AL also voted against it.  He’s not running for President, so he either believes the bill will help not at all (full disclosure, that’s my view as well) or he’s just a crabby old man and likes to piss people off (more likely and also my view).  Which he did. Either way, good for you Rich.

In case you haven’t guessed, this is like College Bowl Season for me.

Will there be a last second 50yd field goal, or a dream crushing interception in the end zone with no time on the clock.

Hard to predict.  That’s why they play the games.

4 comments on “Cliff diving II: What happens when you hit the water or While you were drinking….”