Senator Daniel Inouye, Democrat from Hawaii died yesterday, 17 December.  He was 88. He was still serving the people of Hawaii in the Senate.  He’s going to be remembered for a lot of things.  His service to his country will be detailed at length as it should.  He essentially served the state of Hawaii and the United States since he reached voting age.

But it was Republican Minority leader Mitch McConnell from Kentucky that hit on the quality or trait that I find most astonishing and most impressive.  Senator McConnell said he’ll always remember the humility that Inouye displayed during his time in the Senate.  His time in the Senate spanned 49 years.

Never has that humility been more on display than these last few years.  Democrats and liberals, and he was both, have been assailed as weak, not military friendly, soft on virtue and short on values.  Inouye stayed quiet through it all.  He would only have to stand and pull his empty shirt sleeve out of his jacket and tea party freshmen senators and congressmen would have been revealed for the know nothing jack asses they are.

Inouye, besides being an Senator, also served in Congress.  In fact he was the congressman from President Obama’s district the day Obama was born in Hawaii.  Now we may never know if the babe in the swaddled cloth was Hawaiian or Kenyan.  Hard to resist that one.

Beside all of that, Inouye was also a soldier.  One of two remaining senators who served in WWII.  He was at Pearl Harbor on December 7th, serving as a civilian medical volunteer.  He dropped out of med school to join the war effort as soon as the ban on Japanese Americans serving in the military was lifted in 1943.

His service in the US Army resulted in the Purple Heart, Bronze Star, and Medal of Honor.  It also cost him his arm and his career as a surgeon.  He obviously never went back to med school after the war.  He instead stayed in the army achieving the rank of captain.  Then on to college to study political science because a young Army man named Bob Dole talked him into going to congress with him.  Dole and Inouye hatched their plans for government service while recuperating at a VA hospital after each lost their arm.  The place was called Battle Creek.  Now it’s called the Hart-Dole-Inouye Federal Center, in honor of the three men who recuperated there and went on to become US Senators.  Phillip Hart, a democrat, would be elected to the senate from Michigan and pass away in 76. Of course Dole served as a republican senator from Kansas.

Daniel Inouye was not just a senior senator, he was Pro-tempore of the Senate, making him third in line to the presidency.  Still he sat there, quiet when Senate Republicans, the young guys mostly, tea partiers, preisdential candidates and O’rielly, hannity, and limbaugh, would rail about the leeches, the lazy and the 47% of this nation who won’t take responsibility for their lives and exist only to take government benefits. The implication being of course that liberals made up that 47%.  Forget about the wounded vets who take the same benefits and are part of that 47%.  So a Medal of Honor recipient like Inouye and a Bronze Star and Purple Heart recipient like Bob Dole are leeches and takers, not givers?

How his missing arm must have ached listening to that crap.  The humility that Senator McConnell talked about served Inouye well. 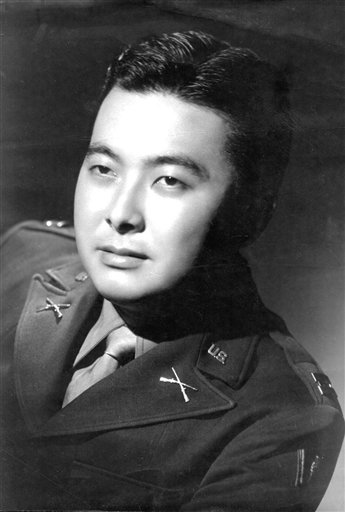 He first took a bullet above his heart. It was stopped by two silver coins he kept in his shirt pocket.  Then he was hit in the belly.  He refused treatment and rushed the first gun emplacement. Subduing it, he rallied his squad for an attack on the second gun.  Then he was hit again.  Still refusing treatment, he engineered a rush on the third gun.  He was hit in the arm by a rifle grenade, leaving his own primed grenade reflexively “clenched in a fist that suddenly didn’t belong to me anymore.” His troops rushed to him to help and he backed them off.  He feared the hand in the severed arm would relax and set off the grenade.

So he threw it.  Yeah you read that right.  Using his good arm he chucked the whole mangled mess at the Germans on the third gun; arm, hand, grenade, the whole shootin match.

After the third gun was subdued and he was being transported, unconscious, he awoke to the site of his men looking at him.  He yelled at them to get back to their positions, cause “the war hasn’t been cancelled.”

You could say he had done enough.  Given enough for his country. He apparently didn’t think so.  Dole lit a fire under the idea of serving in congress.

After they parted ways and Inouye got home he went to a get a haircut. The barber told a three time decorated war vet and Medal of Honor recipient, “get out, we don’t serve japs here.”

For some reason, for better or worse, depending on your perspective, he decided to serve the people who would not serve him.

He served in the Congress, first as a representative, then as a senator.  Hawaii became a state in 59.  He became the representative from his district at the same time.

53 years of service to the state of Hawaii, but he began serving them and giving to them since December 7th 1941.

Again Kentucky Senator Mitch McConnell, republican minority leader,  summed up Inouye best, “He was the kind of man, in short, that America has always been grateful to have, especially in her darkest hours, men who lead by example and who expect nothing in return.”

6 comments on “Daniel Inouye: A profile of service.”