Although it’s not specifically or directly set up this way, if there is a liberal voice at Unfiltered and Unfettered, I’m it.  But even I can’t defend the ridiculousness that is the People for the Ethical Treatment of Animals.  I mean to me just their very existence is bad enough, but their ad campaigns have gone from radical to outlandish to downright shameful.  They had one bright spot when they went with a sex sells the message slant. PETA had a bunch of the beautiful people all nekked in ads talking about wanting to be nekked instead of covering up with fur.

For the uninitiated, in the South naked is just a person not wearing any clothes.  Nekked is a person without clothes who is up to something.  And the ladies in the PETA ads were definitely nekked.  But that was then this is now. 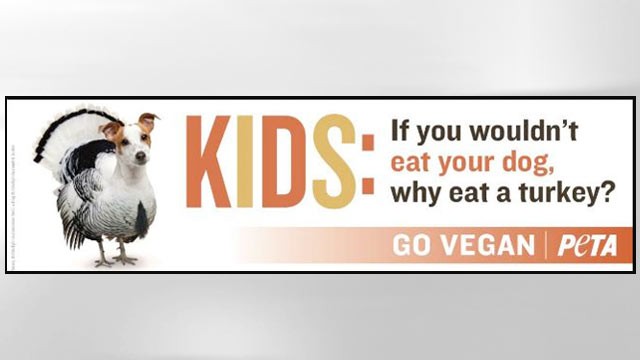 No words for this.

This is their thanksgiving Day message for the tots, and I ain’t talking tater.

If you’ve ever eaten dog or cat meat, you know the first sign doesn’t make sense. Completely different texture.  Especially cat, very stringy and coarse, like getting a mouthful of sand with your cheeseburger. The other, well that’s a pretty stupid ad for an organization that lifts not a finger for the pro-life/anti-abortion movement in this country.  Their official position is having no position on the killing of human animals, their focus in only on non-human animals.  That’s right from their web site.

How ridiculous is your message if you can’t discern the ridiculousness of your stance, if you are so blindingly stupid you can’t see and join with an ally more powerful than you yourself will ever be?  Pro-lifers regularly hand out animal rights pamphlets, by the way, still no response from PETA. And lastly, how bad must your message be if the universal money in the bank of all ad campaigns, blondes and boobs, can’t deliver and your only option is to shock kids into nightmares?

And just in case that method might fall short, PETA backed it up with a few billboards of outright lies, also aimed at and featuring kids.  Cause you know, scaring the crap out of little kids is only really effective when you cap it off with made up stuff.  Take a look.

Couple of problems here.  First of all, I know a few vegans.  One dude is as skinny as you might expect, the other two, well lets just say they have rewards points at the big and tall store.  So not sure the meat is the problem.

Second problem, the skinny kid I mentioned, he knowingly uses false reports and lies in his anti-meat campaigns because he believes it still gets the message out.  It’s sad really.  I grew up with the guy.  He lived down the street.  We played football, soccer, were on the track team together, you name it.  He went off to college and I had not heard from him until about 3 years ago.  We reconnected on facebook.  Turns out he’s living in Arizona, a vegan, and a very radical activist for vegan causes.  He hands out gruesome pamphlets, tosses blood, stages rallies, all the good stuff freedom loving Americans have the right to do.  One day he posted a story from a web site called NewsWeak.  Note the spelling, it’s accurate.  The web site is akin to The Onion.  The stories are all made up, intentionally.

They ran a cover story about a 4th grade teacher telling parents she was taking their kids to a museum, but instead ran them over to the meat packing plant to watch the cows get slaughtered.  The accompanying picture is of 4th graders running for their lives and vomiting the whole way.  Of course the parents just snap away with their iPhones instead of helping the kids.  And of course the story is fake, as are the pictures.  If that didn’t clue you in, it also says all stories are fabricated in big green letters in the mast head of the web site.

I asked my buddy if he knew the story was fake and before he could respond several veganites tasted blood in the water and pounced.  I was defending myself against salad eaters as they figuratively tore at my flesh to dare suggest the story was false.  Finally he decided the arguing on his FB timeline had gone on long enough, plus his people were really making fools of themselves and hurting his overall message.  His response: “No matter the truth of the story, it still gets our message out in a positive way.  And sheds light on our cause.”   Hahaha.  Wow.

How worthy is a cause if they have to scare kids and knowingly tell  lies to get the message out?  Do you have a message if you have to fabricate it?

Isn’t it time the PETA folk take a step back and reevaluate?  Better yet take a step forward, to a mirror, and realized the whole movement has jumped the shark.  Even the cliches we use to describe the done-ness of the movement are out of touch.  Jump the shark has in fact jumped the shark, but in this case it fits.

It becomes even more clear when your organization’s acronym becomes one of the best punchlines going.  PETA – People for the Eating of Tasty Animals.

I think Homer Simpson, yes the cartoon character from a show that’s been on the air about as long as PETA has been around, summed it up best when he was quoted in Parade Magazine, “I find a half pound of meat really wakes up a veggie burger”